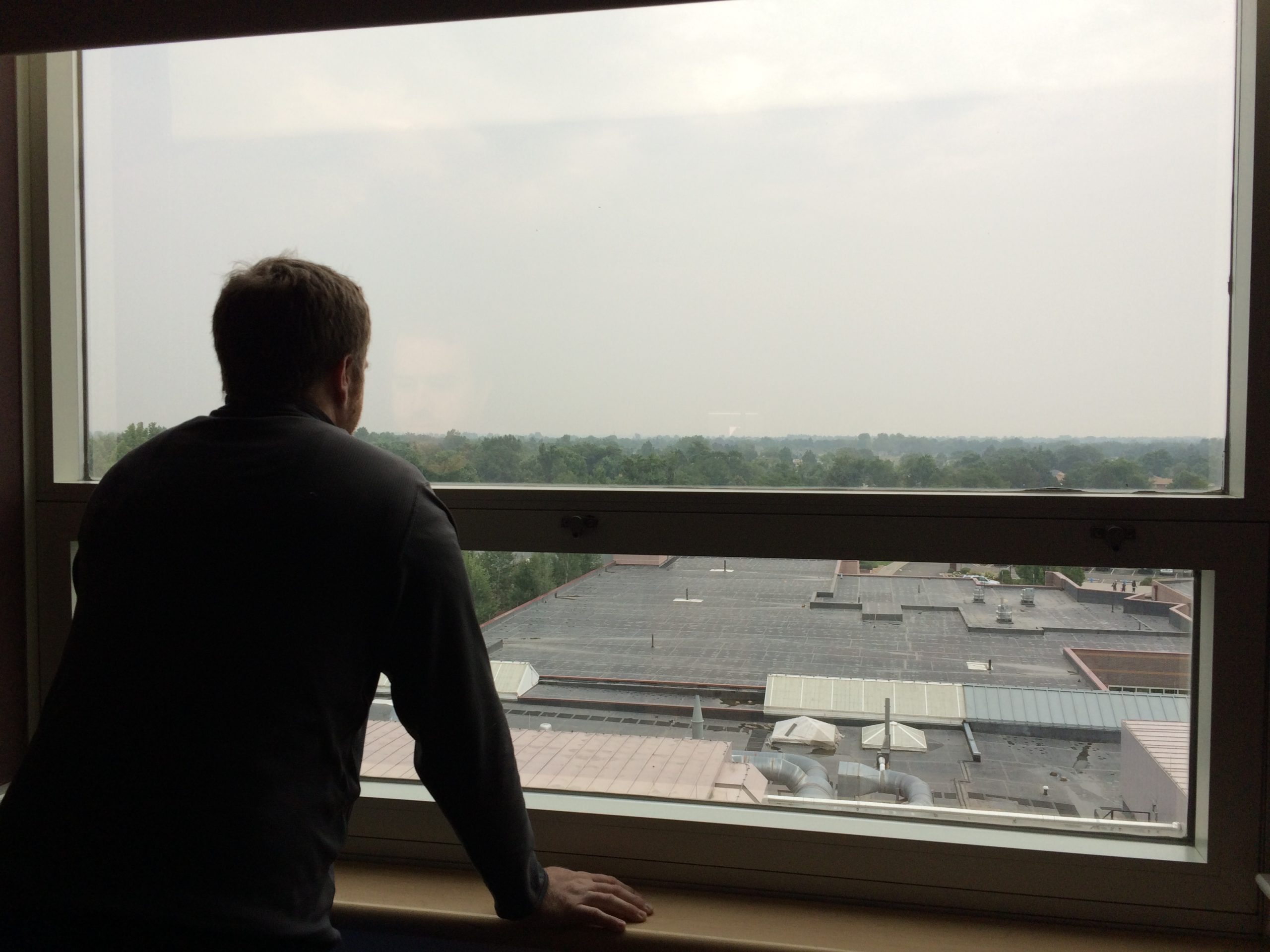 Calm Before the Storm: Part 1

I’ve heard several planters say that at points in establishing the church, they realize that everything is going well… really well. People are coming to Christ. Families are jumping in and joining ministries at the church.  The children’s and teen ministries are growing and expanding with great speed. And then they hold their breath. Waiting… for the storm to begin to rumble in the distance.

And as lightning strikes… they grab onto anything close to them and pray for God to carry them through.  I know, because, we have just experienced this at our church.  There was excitement everywhere at Thrive.. and then a slow ache of complacency creeped in. Doubts formed. Leaders were overwhelmed. And burnout begins to flicker.

If we turn to Matthew 8 and Luke 8, we learn how the disciples handled a very crazy storm upon Lake Galilee.  I specifically love the description of this situation in Mark 4:35-41 (NLT).

As evening came, Jesus said to his disciples, “Let’s cross to the other side of the lake.”  So they took Jesus in the boat and started out, leaving the crowds behind (although other boats followed). But soon a fierce storm came up. High waves were breaking into the boat, and it began to fill with water. Jesus was sleeping at the back of the boat with his head on a cushion. The disciples woke him up, shouting, “Teacher, don’t you care that we’re going to drown?”When Jesus woke up, he rebuked the wind and said to the waves, “Silence! Be still!” Suddenly the wind stopped, and there was a great calm.  Then he asked them, “Why are you afraid? Do you still have no faith?” The disciples were absolutely terrified. “Who is this man?” they asked each other. “Even the wind and waves obey him!”

How did the disciples handle the storm? With panic.  With doubts that Jesus would allow them to perish. By trying to take control of the situation.  So, how should they have handled it? Would they not have remembered King David’s song, where he wrote in 2 Samuel 22:10,

“He opened the heavens and came down; dark storm clouds were beneath his feet.”

Their own fears clouded their vision of who was sleeping in the boat next to them.  They chose to panic and distrust rather than put their faith and trust in the One who had created the world.  Yes, maybe they didn’t trust that God would take care of them.  Maybe they didn’t trust that God knew the outcome of the storm.  But don’t we all do that?  When storms erupt in our lives, is our first instinct to trust that the God who created those waves, rain, thunder and lightning? Do we trust that He has the power to keep EVERYTHING under control?  Or do we need some reminding?

So, if a storm is breaching the church, what do you do as a leader?  Do you wait it out?  Take cover? (As some storm chasers would say…) Or do you do the unthinkable and drop to your knees?

Something that most people would see as strange when a storm approaches.

Instead of running… and shutting people and relationships out… address the storm for what it is.  It is warfare, not brought on by those around you in your church but from the one who is deliberately trying to bring you down: Satan. A minister once told my husband to remember who the true enemy is… not those around you in the church who bring frustrations or issues… but the one who has battled against God since before time.

When issues crop up, address them head on.  Pull those in question to you, point out what Satan is trying to do and then get on your knees together to ask God for a solution… and for His Protection.

Remind Yourself and Your Team.

This is not the time for panic.  Leave all of that behind.  (Take a few breaths if necessary.) Ask God for strength and peace to know how to handle the situation.  Isaiah 26:3 says,

“You will keep him in perfect peace, whose mind is stayed on You, because he trusts in You.”

How do we keep our minds on Him?  The easiest way we know how. Pick up His Word and remind yourself and team of his power and faithfulness to us.  Keep a list of the things that God has shown his faithfulness in the past and reflect on them during these times. Knowing and remembering these things will help you to push through to the calm after the storm.

This verse shouts to me when I am weary and downtrodden.  John 14:27:

“Peace I leave with you, My peace I give to you; not as the world gives do I give to you. Let not your heart be troubled, neither let it be afraid.”

Gather your troops and read through scriptures that will uplift and give you strength.  Remind each other of God’s faithfulness.  Then pray and support each other through these times.

by Meg Brown | Sep 22, 2014 | Hope for a Church Planter, Truth about Church Planting, Truth About Life

It’s one of those things that is almost hush-hush in the Christian community.  Even as a minister’s wife, I am sometimes hesitant to bring it up.

But it’s real.  And still at work in this world.

But the one thing I have learned, if anything this year, is never retreat.

Because that is what Satan wants us to do.

When I was in high school, I toured with a traveling Christian choir during the summer.  I was chosen to do a skit with another student about putting on the full armor of God.  I remember having to memorize Ephesians 6:10-18.  It reads:

10 Finally, be strong in the Lord and in his mighty power. 11 Put on the full armor of God, so that you can take your stand against the devil’s schemes. 12 For our struggle is not against flesh and blood, but against the rulers, against the authorities, against the powers of this dark world and against the spiritual forces of evil in the heavenly realms. 13 Therefore put on the full armor of God, so that when the day of evil comes, you may be able to stand your ground, and after you have done everything, to stand. 14 Stand firm then, with the belt of truth buckled around your waist, with the breastplate of righteousness in place, 15 and with your feet fitted with the readiness that comes from the gospel of peace. 16 In addition to all this, take up the shield of faith, with which you can extinguish all the flaming arrows of the evil one. 17 Take the helmet of salvation and the sword of the Spirit, which is the word of God. 18 And pray in the Spirit on all occasions with all kinds of prayers and requests. With this in mind, be alert and always keep on praying for all the Lord’s people.

My minister when I was growing up, John Green, pointed out, that the armor of God does not cover your back.  God has given you everything to protect you when you are advancing into battle.  But nothing to cover your back if you decide to retreat.  Why?  Because God wants you to stand your ground… and after you’ve done everything… to stand firm.  Your faith in God, is where you will deflect the attack arrows that Satan will undoubtable send your way.

Attacks on the Plant

The week before our One-Year Anniversary, our entire team was hit with spiritual warfare.  Men and women both grew weary, let fears run rampant and many got physically sick.  At this same time, my mom found out she had breast cancer and her father (my Gramps) was diagnosed with dementia and needed to be put in a nursing home.

For two days, I walked around in shock (maybe I should say, sat around in shock… as I don’t know if I left the couch for two days…)  My entire extended family was on their knees, asking God, “What’s next?”  My husband went into “Take Care of Megan Mode” and the boys pitched in around the house.

I just kept shaking my head in confusion.  And then someone said something to me- and my robot response snapped me back into reality.

A woman, I greatly respect, in the middle of a conversation with me said, “I’m just really confused right now… and am not sure what to do.”

My response?  “Well, our God is not a god of confusion.  God will show you what His Will is.”  I immediately froze.

Did I really believe that?  Because my actions right then were not demonstrating my belief.

All of a sudden, it was like my brain and my heart snapped back into alignment.  I realized how little I had been running to God when things were getting hairy.  I picked up my Bible.  Verse after verse confirmed what God had been trying to whisper to me for days.  “I will rescue you.  Just lift up your head to me!  Look for me…  I am just waiting for you!”

I battled depression off and on this year; it is humbling to admit.  There were times when I ached for my home to be just my home and not an open door to everyone in our church.  There were times I fought off urges to isolate myself from impending harm from others, and so I built up walls to protect myself.  There were times when gossip ran rampant through a neighboring church and I literally felt the betrayal anytime we bumped into someone from there.

I wanted to quit.  I wanted to move away and hide.  I almost came to the point where I began to ignore my God.  But something stopped me.

Michael, the boys and I were sitting down at a restaurant we’d never been to before, and a man and his son, sat adjacent to us at another table.  He began to make friendly conversation with Michael about our boys and soon they were asking each other questions about work, our kids, where we went to church, etc.  When he found out we had just planted a church, he began inquiring about it.  Our food came, and the conversation sort of ceased, as we jumped into our burgers and fries.

Suddenly, he cleared his throat.  “Do you ever preach on spiritual warfare?”

I almost choked on my bite.  My husband answered, “I have before… but not this past year.  Why do you ask?”

Yeah.  Why did he ask?  I wondered.  Maybe I am just naive.  But I have never heard anyone inquire about spiritual warfare the first time they’ve met my husband.

He answered my husband.  And it was a legitimate answer.  But it just made me scratch my head.  The Holy Spirit seemed to want me to pay attention.

Later that afternoon, in the middle of worship band practice, our team admitted that they were all being attacked.  Our leader spoke it well when he said, “We need to address this right now.  There is some battles going on right now that we need to take to God… ”  He was right.  We stopped right then and there and prayed.  For our team.  For our church.  For our families.

Our anniversary Sunday was awesome.  God showed up in a big way.  I felt like we were all just spectators watching Him show off.  It was so good.  (I’m getting teary-eyed just thinking about it.)  People walked through our doors and left with huge smiles.  And for the first time in a long time, I cannot wait to see my church family.  Can.  Not.  Wait.  In fact, when we bumped into several of them tonight at the soccer field, I was SO EXCITED.

God is moving at Thrive.  So much so.  When we don’t retreat during attacks by the Evil One, God’s Kingdom can advance.  And it will continue to!