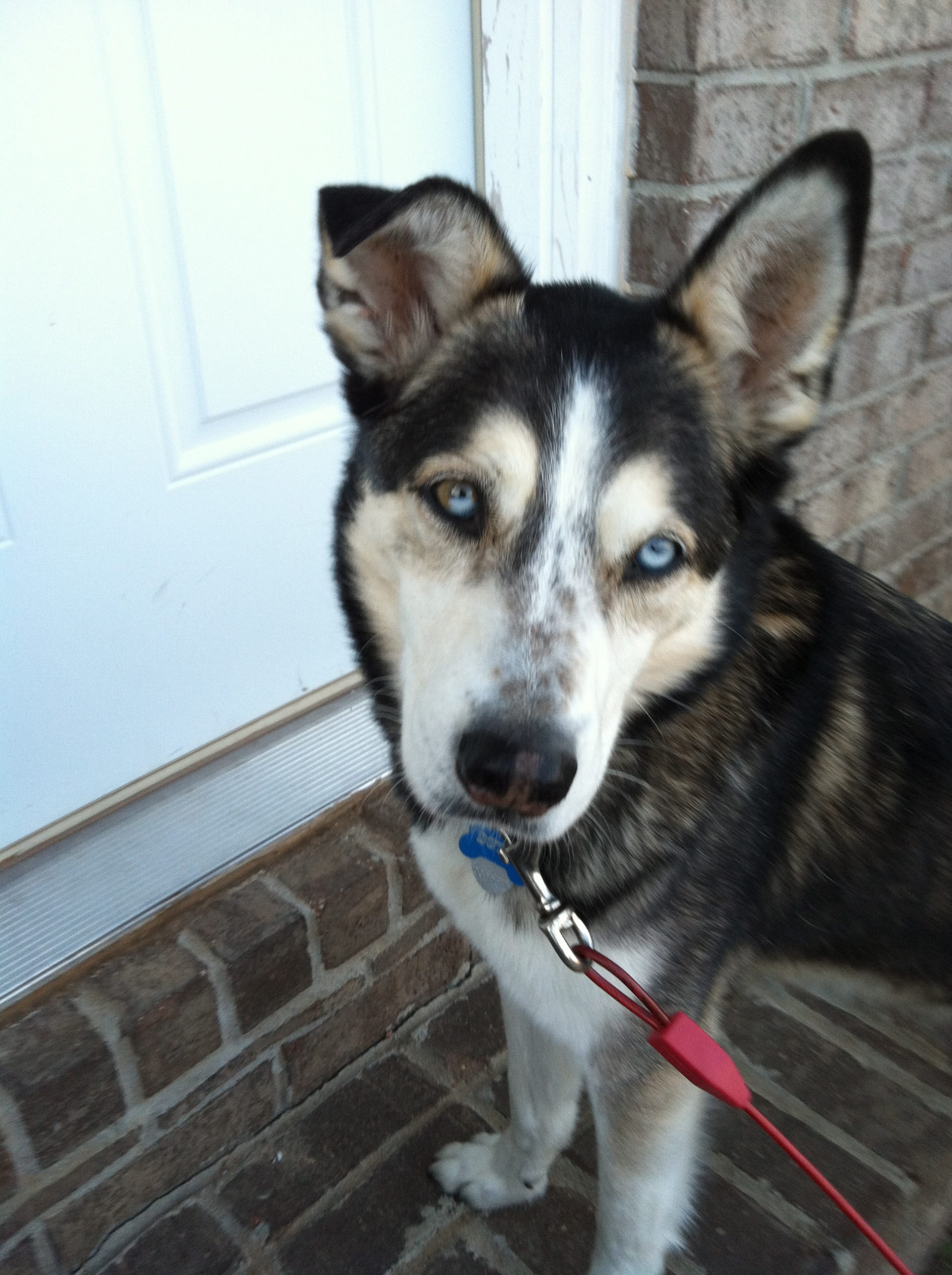 Dutch: Protector of our Family

“Mom.” My seven-year-old son’s voice broke through my pizza-eating revelry at our favorite pizza joint. Titus had whisked away my phone and was scrolling through photos of our local pound’s adoptable animal photos. He had been begging us for a pet for around a year now.

My husband, Michael and I had tried every excuse in the book to avoid the commitment of getting a dog. “You’ve just had another baby brother… we should wait until he’s older.” “Our house is too small… we need to wait until we move into another home.” “We’re not sure you’re ready for the responsibility of a dog, Titus.”

This time, there was a tone in his voice. Like he meant business. I looked up from my slice of pepperoni and across the table at him. He had a bright light in his eye and an excitement I had not seen on his face in a while. He handed my phone back to me with a photo of a very frustrated, older Huskie dog trying to jump the fence of the kennel at the pound, enlarged and prominent on the screen.

There was sadness in this dog’s face that I instantly understood. A sadness that words cannot define.   I was struggling from post-partum depression after the birth of our third son… and that look in the dog’s eyes grabbed me. When I turned to my husband, he rolled his eyes, but made no dismissal. I immediately messaged the pound asking for details.

Within days, we met Dutch for the first time. He was a nine-year-old Siberian Husky, with one brown eye and one blue and he shared my birthday. His fur was so soft; you could not help but stroke his back every time he passed you. One of his ears was bent, while the other stood proud. It only took a half hour for our two older boys to fall in love with him. I was hesitant… who was this dog? Why had he been relinquished? Could he be trusted with my children? Was he a “good dog?”

Those questions and more were all answered by that evening. After laying our children down for the night, my husband and I prepared for bed. Dutch circled the rug next to my side of the bed and lay down. He seemed to wait for us patiently to finish our bedtime routines. As soon as we settled and turned the lights out, he got up and disappeared into the hallway. Worried to see where he was going, I reluctantly left my warm bed and went to look for him. I found Dutch, curled up next to our baby’s crib, sound asleep.

It only took a couple of days for him to flow into our family’s lifestyle. He began barking to sound the alarm whenever someone approached our home. He LOVED walks… so much so, we could not even SPELL the word out loud anymore. He became my vigilant running partner and would run beside the jogging stroller where my youngest was along for the ride. He lay in the kitchen while I cooked, waiting for crumbs to drop to the floor during the process. He was an extrovert and made sure to meet all the dogs in the neighborhood.  Everyone remarked at what an amazing dog he was; he was well loved by our extended family and friends.

Of course, he wasn’t a perfect dog as he was terrified of fireworks and thunder. He had an obsession with cupcakes and hotdogs (when I left out two dozen lemon cupcakes to cool; he ate 10—including the wrappers.) We could never leave the front door open, or he would dart out to explore the countryside for hours. He would distract the cats and eat their food; later, his loud toots would clear the living room. He learned to sit patiently next to our baby’s seat at dinner… and the baby learned he could feed the dog anything he didn’t want to eat. Occasionally, when it rained, his arthritis would kick in and he would be pretty grumpy and impatient with the boys’ antics, but he never snapped or showed his teeth.

But no matter how imperfect he was- he was perfect for us… and me. On my dark days, when my husband was at work, he would lay next to the couch where I lay. He followed me around the house those days, making sure I was never alone. He would snooze when I would, and when I woke up, he would perk up his head at me and give me this look of understanding. When the baby would cry, he would gently nuzzle me with his cold nose to wake me up. He was my helper; and he slowly walked beside me until I was back to normal.

He wasn’t just my companion. Our boys began to want him to sleep in their rooms and they talked about sled dog adventures all winter, waiting for it to snow. They dressed him up in costumes, and he sat, participating, as long as his beautiful fluffy tail wasn’t pulled or stepped on. He sat, stayed, shook and rolled over on cue from them. Our middle son, Elliott, taught Dutch to catch popcorn in his mouth while lying on his back.

And finally, Dutch worked his way into my husband’s hesitant heart.   One night, only months after his adoption, I heard my husband wrestling him in the living room. When the play was over, I looked over. Both my husband and Dutch were grinning at each other. I watched as Michael stuck his face into the fur on Dutch’s neck and mumbled, “I love you, Dutch.” My heart caught in my throat.

We had a wonderful year and a half with Dutch. I often think that God sent him to us when we needed him the most.

Suddenly, without warning, he got sick one night while my in-laws were visiting. My father-in-law, Pat, took care of him during the night, not even waking my husband and I. We went to church the next morning and he seemed fine. By nightfall, I began to worry again and told my husband to call the vet. But it was too late.

As I was getting ready for bed, my husband crashed into our bedroom, tears running down his face. “Dutch is gone….” was all I could understand. In our grief, my father-in-law decided that right then was the time to bury him. We followed him, numbly, picking a spot in the backyard to bury him (we had just had our utility lines marked in the yard for our new landscaping plans.)

In the chaos and grief of the night, as Pat began digging Dutch’s grave, he hit the gas line that ran into our home. We had to wake our children, call Source Gas and fire department and wait on the cold pavement next door, while our children cried for Dutch. It was awful.

Days later, after everything was fixed, the gas company sent out a man to double check and make sure we didn’t have any gas leaks leading into our home. After finding out we had just lost Dutch, he kindly said he would check our furnace and water heater as well, just to be nice. After tinkering around in our garage for several minutes, he called me into the garage.

“Ma’am, I wanted to let you know, that your water heater has been leaking carbon monoxide into your home since it was installed improperly.” I was stunned. He turned to me. “Not to be blunt, ma’am,” he began again. “But I think your dog’s passing saved your family’s lives.”

Suddenly, Dutch’s death made sense to me. He had always protected us from the time he was introduced into our family. It made complete sense that in his death, he would protect us as well. He was not just a good dog; he was our Dutch.

Our church plant just celebrated it’s One Year Anniversary!  (Praise Jesus!)  We celebrated with a cookout, sand volleyball, and football in the park.  As I looked around, I saw a true family.  People were laughing, hugging, and cared for each other through their words and actions.  It seemed surreal.  But none of this would be possible if our team had not been in prayer for our church and each other.

Here are 3 things we have prayed for our church:

This may seem simple but it is not.  Too many times as humans, we believe that we can do it on our own.  We cannot!!!  If we are going against God’s will, we will just end up banging our heads on the wall in frustration!  Our poor decisions and choices will return harsh realities.  (This is true in our personal lives as well.)  We must ask God to go before us and to lead us where He wants us to go.  Deuteronomy 31:8 says:

“The Lord himself goes before you and will be with you; he will never leave you nor forsake you.  Do not be afraid; do not be discouraged.”

Now, when you begin to plant a church, you are just happy when people walk through your doors.  Any people.  But a church needs good leaders and workers to be able to be sustainable.  You will not be able to minister effectively to non-Christians, new believers or their families if you do not have enough hands that are willing and able.  It’s okay if minor things fall to the back burner at a church plant… but not having someone to take care of babies on a Sunday morning in the nursery is a problem.  Luke 10:2 reads:

He told them, “The harvest is plentiful, but the workers are few.  Ask the Lord of the harvest, therefore, to send out workers into his harvest field.”

Many on our team began to recognize when God was beginning to work within our church and through our church.  Why?  We were all hit hard with spiritual warfare.  (See previous post.)  When we realized that Satan was doing everything in his power to distract us, we buckled down and dropped to our knees for protection.  In these times, we cannot become focused on the negative things that are developing around us.  They are being used as a distraction device.  Our God is not a god of confusion.  Remember that.  There are several verses in the Bible that talk of God’s protection.  Here is one of my favorites: Psalm 91:1

Whoever dwells in the shelter of the Most High will rest in the shadow of the Almighty.

Keep praying for your church.  He hears you.