The Kingdom of God (according to Jesus): Part Two

We know that God has been wanting to in a sense return us to the Garden so that we can walk and talk with God daily. How does that relate to the Kingdom?

Here’s where it gets a little tricky- so I’m gonna try to slow things down a bit. Jesus tended to speak in metaphors and similes when it came to the Kingdom. Maybe, it’s because we wouldn’t even get an idea without them. We’ve built an idea in our heads that the Kingdom only comes when Jesus returns. But the problem is- he brought it with him when he walked on this earth back in the 1st Century. So- if we stop thinking of the Kingdom like heaven (puffy clouds, streets of gold…) and start thinking about it like it’s here now and expanding– then our perspective on the Kingdom can fully develop.

The Upside Down Kingdom

Later on, after John the Baptizer was arrested, Jesus went back into the region of Galilee and preached the wonderful gospel of God’s kingdom realm. His message was this: “At last the fulfillment of the age has come! It is time for the realm of God’s kingdom to be experienced in its fullness! Turn your lives back to God and put your trust in the hope-filled gospel!”

Jesus began preaching to those around him that it was time to experience the Kingdom. Other versions use phrases like, “The time is at hand…” or the “The time is near.”

Then later in Mark 9, the entire chapter morphs around the Kingdom of God theme. (Just an FYI, I’d always been confused by this sentence found in the very first verse of Mark 9.)

Jesus said to them, “I tell you the truth, there are some standing here now who won’t experience death until they see God’s kingdom realm manifest with power!”

At first glance, I always assumed that Jesus was saying that some of the disciples wouldn’t die until Christ had returned. But here’s what we must remember- at this point, the disciples probably didn’t fully understand what Jesus had been telling them about what this kingdom would look like. They had no idea what an upside-down Kingdom it would turn out to be. (I mean, they probably asked themselves, “The Kingdom is here, now? They could experience it? How?”) 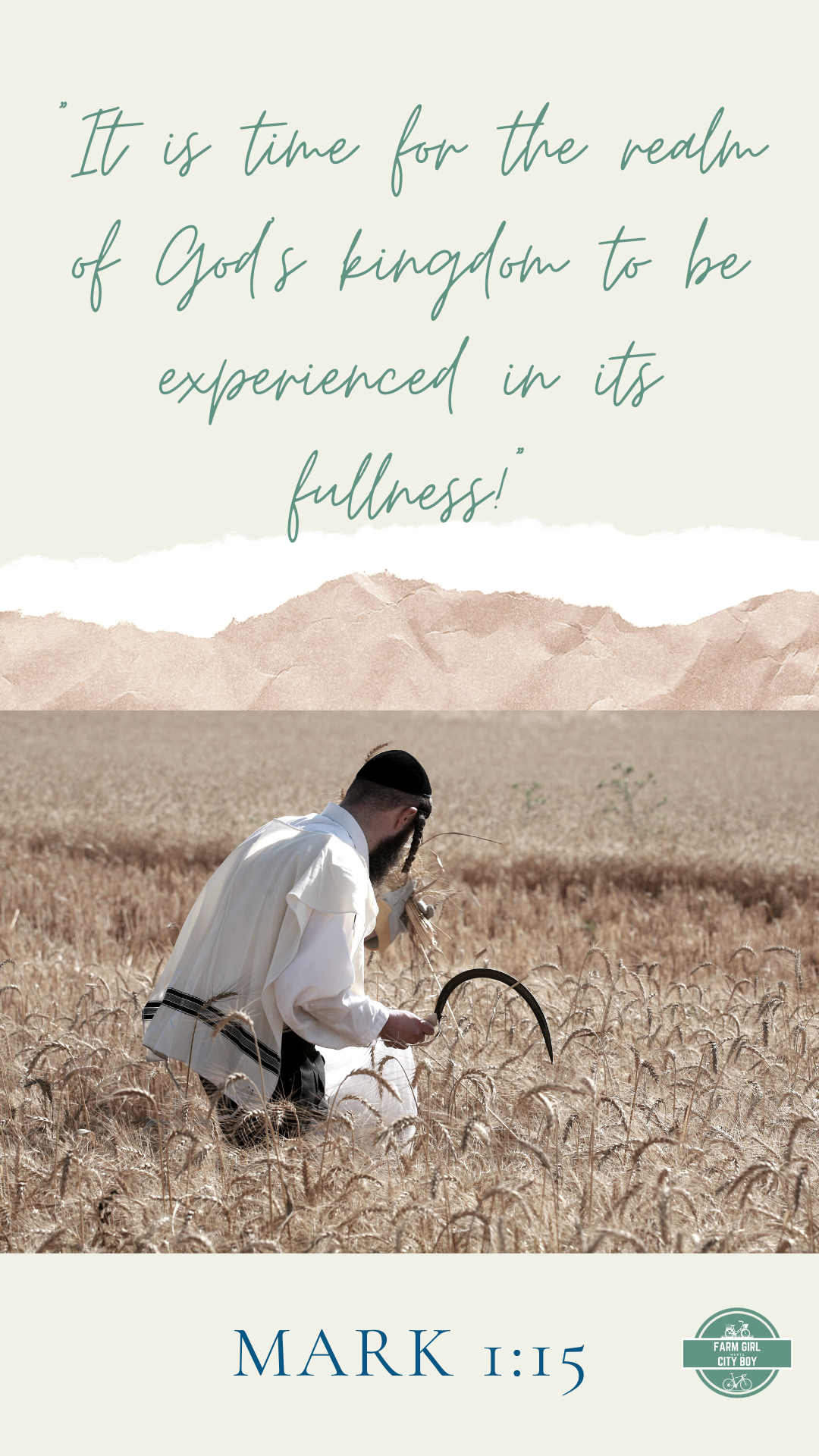 Here, in Mark 9:1, Jesus is talking about the power of the Kingdom of God that would begin to flow out from the disciples through them spreading the Good News. Through word of mouth, the Kingdom of God would advance on earth, through everyone that heard and accepted it. As Jesus said, in Mark 1, “Turn your lives back to God and put your trust in the hope-filled gospel!”

The advancement of the Kingdom wasn’t going to be a quick thing. Every time Jesus talked about the Kingdom, he talked in parables and similes about it. You’ll see what I mean…

He also said, “This is what the kingdom of God is like. A man scatters seed on the ground.  Night and day, whether he sleeps or gets up, the seed sprouts and grows, though he does not know how.  All by itself the soil produces grain—first the stalk, then the head, then the full kernel in the head.

As soon as the grain is ripe, he puts the sickle to it, because the harvest has come.” Again he said, “What shall we say the kingdom of God is like, or what parable shall we use to describe it?  It is like a mustard seed, which is the smallest of all seeds on earth.  Yet when planted, it grows and becomes the largest of all garden plants, with such big branches that the birds can perch in its shade.”

>>>>> Notice how all of this relates to growth? And what takes time? Growth.

>>>>> Wait- it can’t be observed? So this Kingdom that is growing- can’t even be seen? But it gets even more upside-down.

Jesus said, “My kingdom is not of this world. If it were, my servants would fight to prevent my arrest by the Jewish leaders. But now my kingdom is from another place.”

Hmmmm. Take that in for a second.

Okay…So what can we learn from all of these different verses? 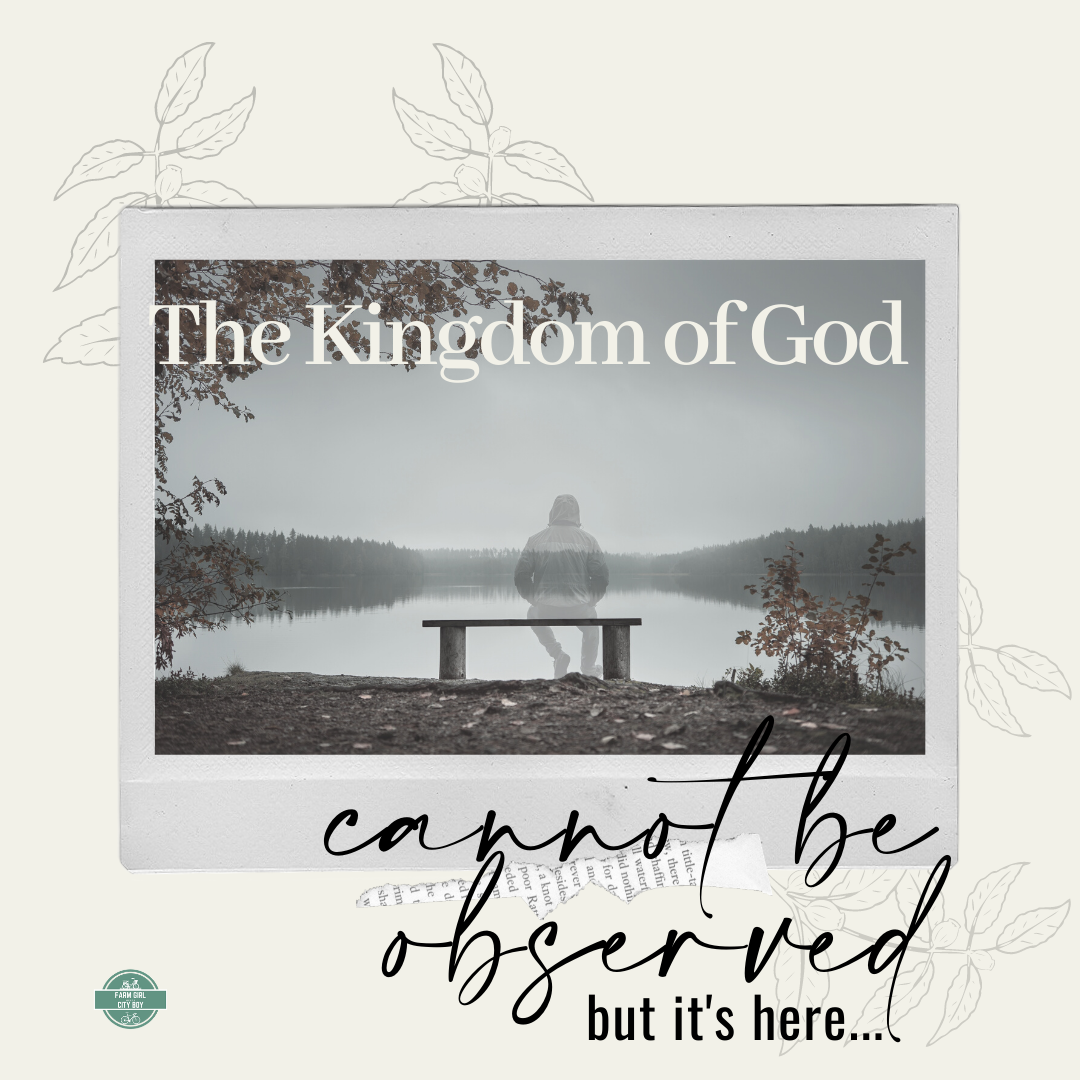 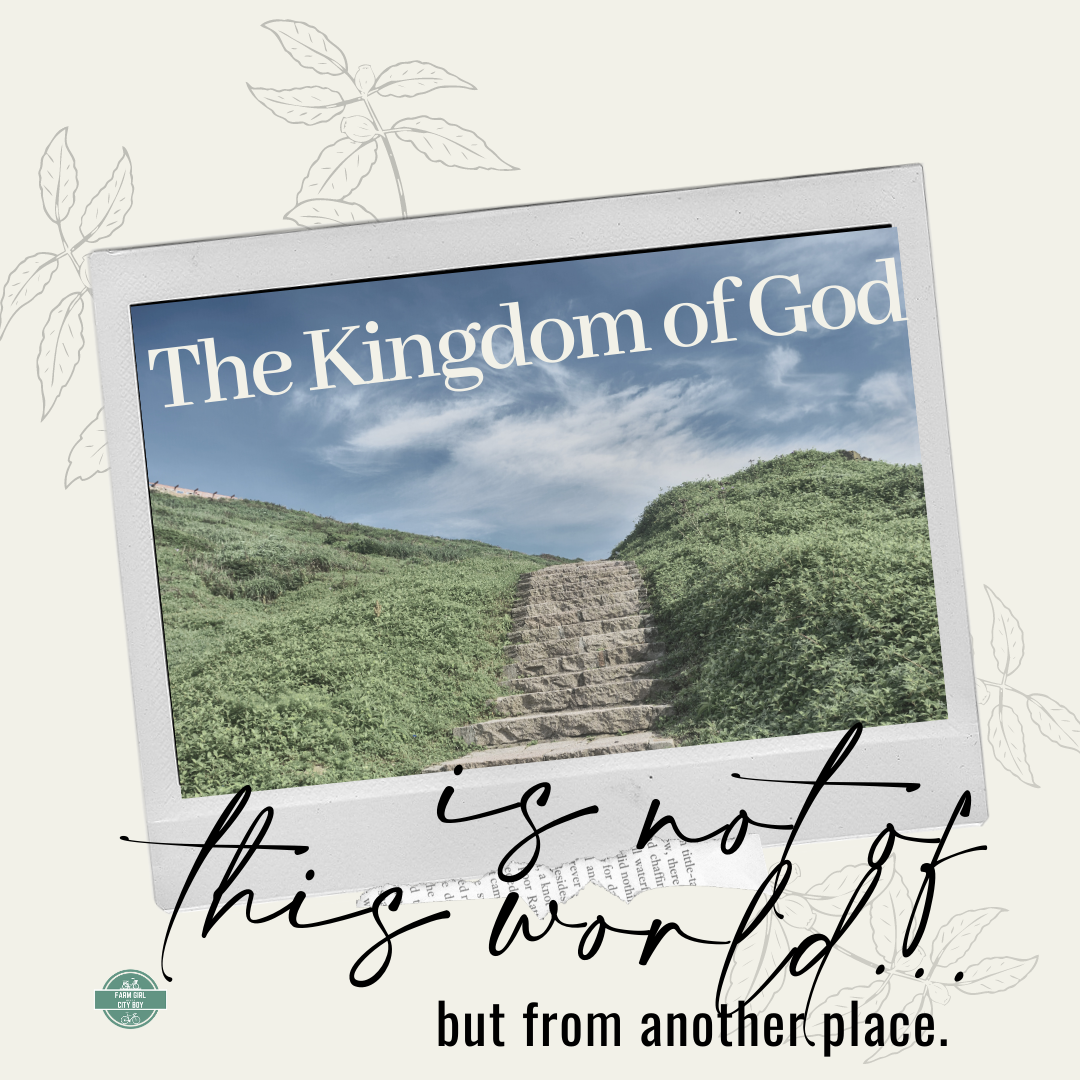 The Kingdom is growing (expanding).

The Kingdom cannot be observed… but it’s here.

The Kingdom is not of this world, but from another place.

All of these verses point to the Kingdom being a spiritual one… one that grows when followers of Jesus spread Christ’s love… serve one another as well as those who are in need… and it’s in a different realm… but also here. It sounds alot like the overlapping of the realms that happened “in the beginning.” Doesn’t it?

What do we need to do about it? How can we help the spread and growth of the Kingdom? First, pray for the Kingdom to continue to expand. For the Good News to be delivered to those who have not heard it yet.

A great place to start is the prayer that Jesus taught his disciples to pray. What’s interesting, is that most of us probably know this prayer and some can quote it. I didn’t actually fully understand the depth to this prayer until I fully understood the complete Good News and the Kingdom.

This, then, is how you should pray:

“‘Our Father in heaven,

hallowed be your name,

your will be done,

on earth as it is in heaven.

Give us today our daily bread.

And forgive us our debts,

as we also have forgiven our debtors.

And lead us not into temptation,

but deliver us from the evil one.’

Here’s the deal… if there’s a kingdom- then there’s a King. And who else but Jesus? He actually inaugurated the Kingdom into our world. He was the one declaring God’s Rule was back in business here on Earth. And when we declare him to be our King and desire to follow Him- the Kingdom becomes present in our lives and in our churches.

What does this Kingdom look like for us today and in our churches? Stay tuned for The Kingdom of God: Part 3!