Although, I love geeking out to God’s Word, I spend about 80% of my time chasing a toddler, wiping counters and dating my husband. Here’s a day (or two…) in my super, regular, exciting life…

On Motherhood and Adoption

Our love story was, in my opinion, what one would call a Meet-Cute. I met my hubby, the first day I was back on campus, my sophomore year of college. While taking my nightly jog, I saw him walking the loop with another guy that could have been his brother, they looked so much alike. At first glance, I thought he was a transfer student, since he looked older than me. I sped up my pace and ran the stairs to try and catch up with them. By the time, I caught up- I realized that I had overdone it… and would need to walk a lap. I ran to my room, grabbed my water bottle and headed back up to the loop to start cooling down.

When I busted through the dorm lobby door, laughing and yelling back at some friends in the lobby, I literally turned my head just enough that I ran SMACK into him. This was not planned… yes, I had planned on catching up with him. No- I didn’t plan on running forcefully into him.

And when those faded blue eyes turned to me, that smile hit me square in my heart, I knew I was done for. This man was going to be my husband. Little did I know that marrying this man would lead to three rambunctious boys and our adopted daughter. In the past 17 years of marriage, we’ve moved to five different states, been in ministry in four different churches, one of those we planted.

Over the years, we’ve fostered several children, adopted multiple dogs and cats, and bought a farmhouse on several acres. My hubby, after living in our new place for a month and claiming our front porch swing where he would read his Bible and drink his coffee in the morning, pulled me aside and said, “It’s like living on a constant vacation out here. So peaceful.” He’s turning into a farm boy more, every day. 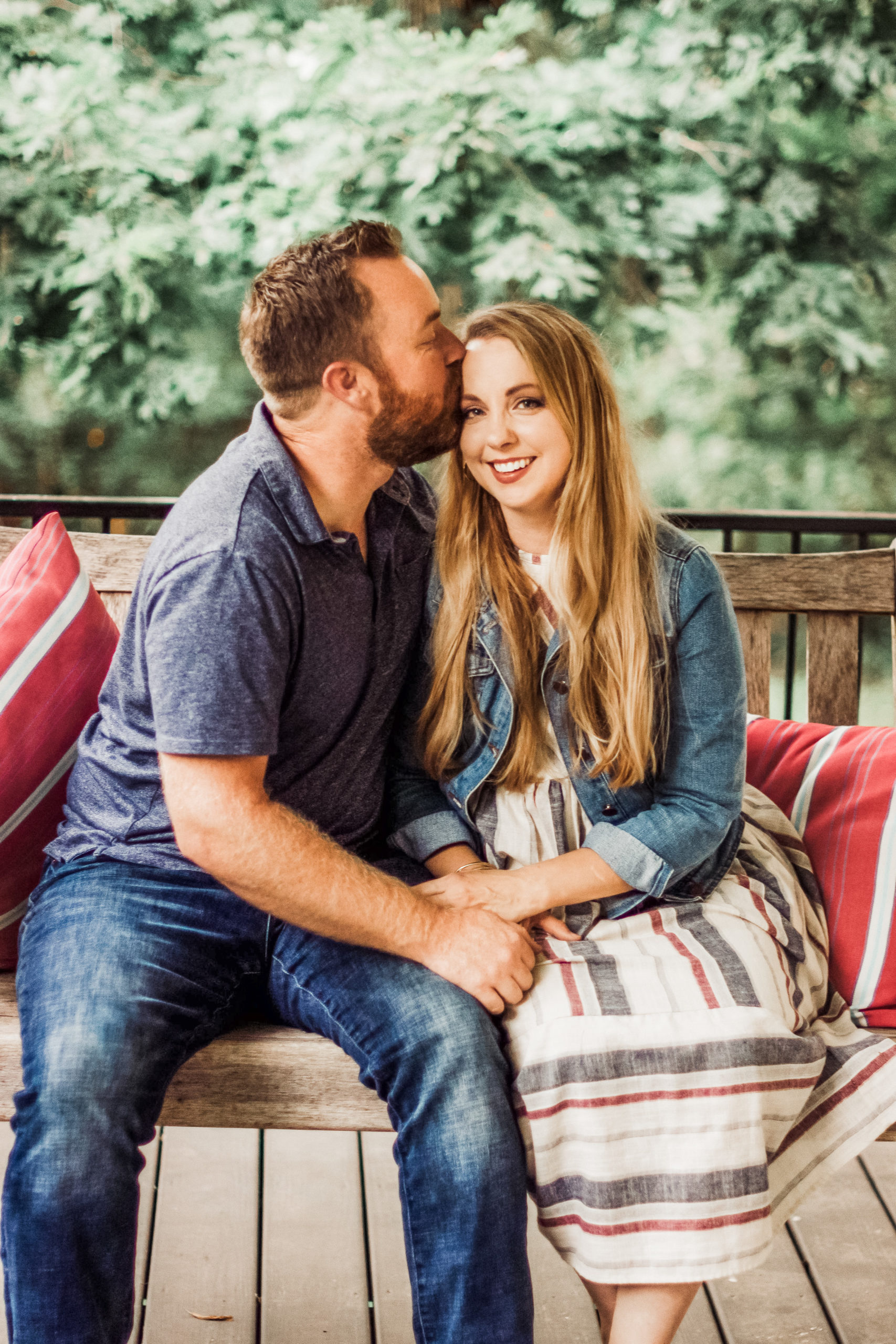 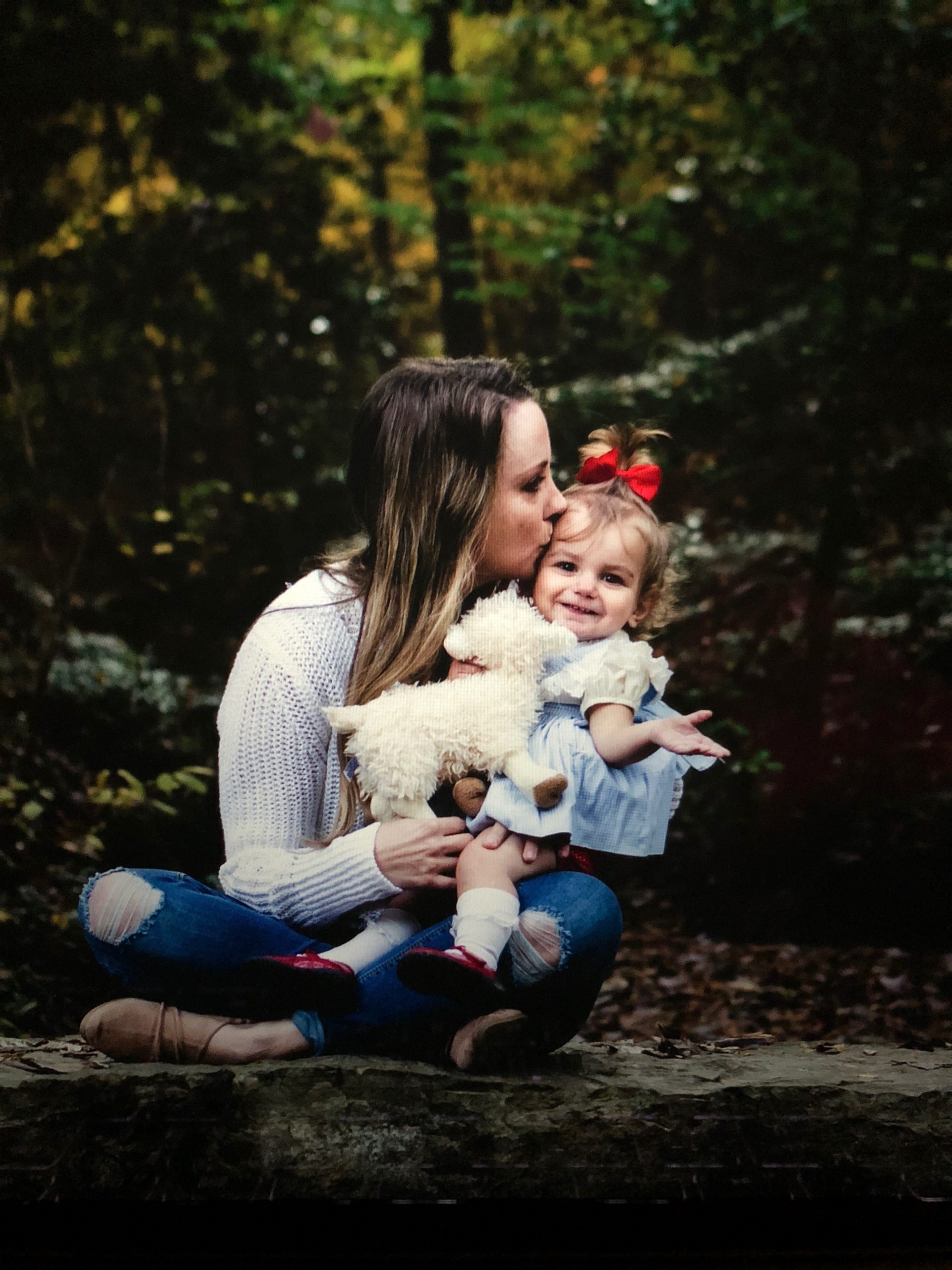 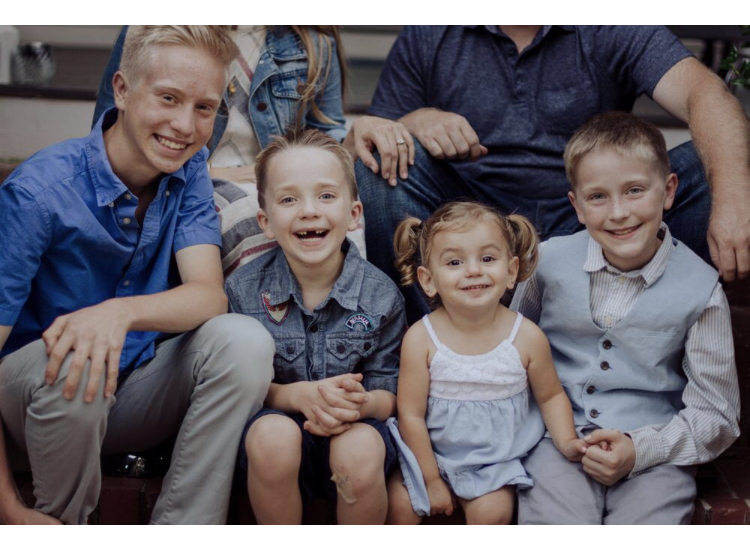 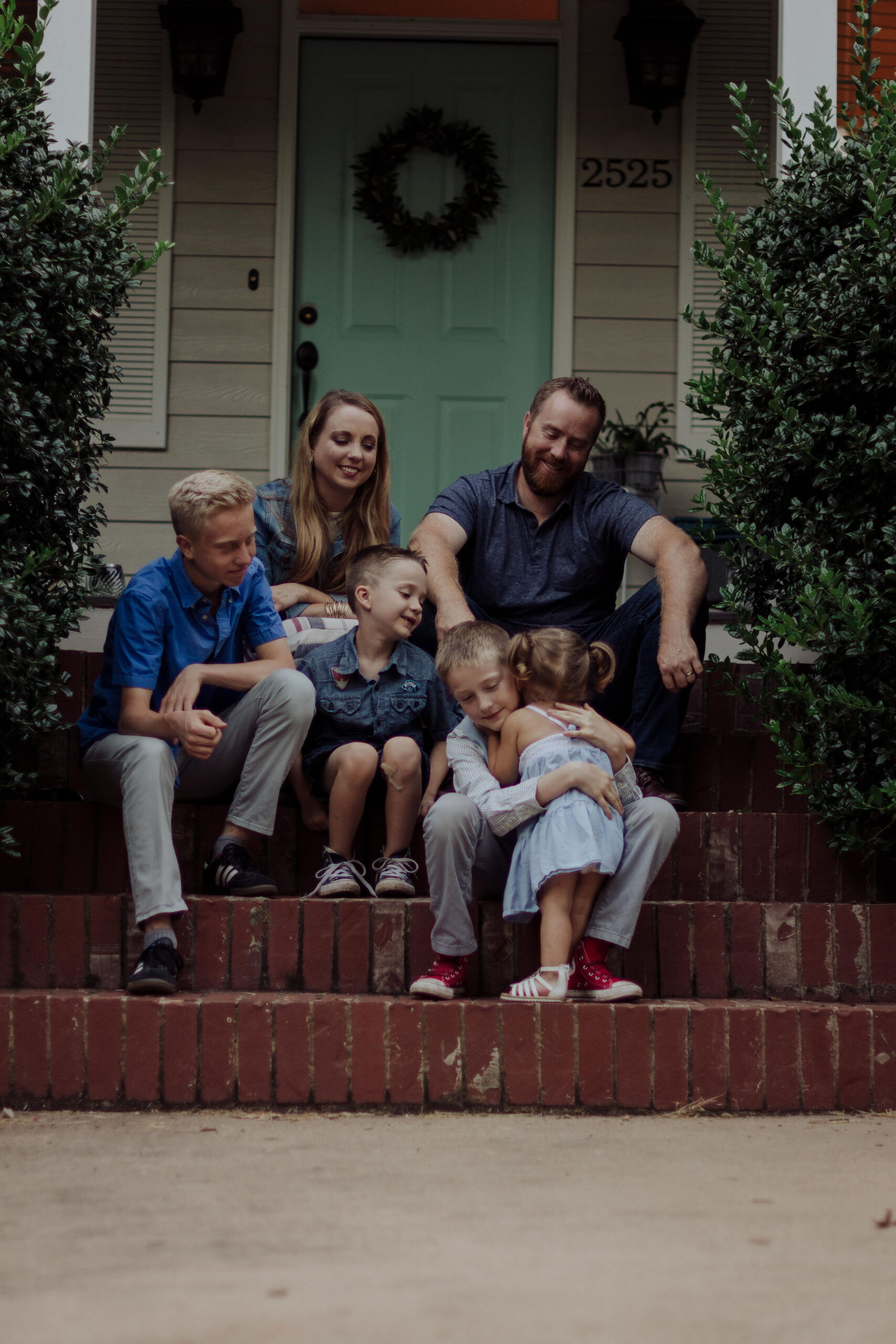 God started whispering to us about adoption immediately following the birth of our firstborn son. I had always been curious about adoption, as I saw it modeled in the lives of my aunts and uncles on my father’s side. But Michael never quite understood my fascination with it until our first date night away from our newborn. We were dirt poor and surviving on WIC checks and Medicaid insurance for myself and our son, as our first ministry. My mom had sent us away to a MercyMe concert featuring Steven Curtis Chapman while she snuggled her firstborn grandson for the evening.

After MercyMe had performed, Steven Curtis Chapman took the stage. After performing, he broke into his story of the adoption of their 3 youngest daughters. He spoke of God’s heart for adoption, and when I turned to Michael, he had tears on his cheeks, and he whispered to me, “I get it now.”

Fast forward five years- We took a ministry in Indiana, and I was privileged to work alongside a team of women who led our MOPS team. During that time, I met countless families who were fostering or had adopted through the foster care system. One little girl with curls and a big smile always got to me. She was such a happy child, and her family ADORED her. I began to see advertisements and billboards and meet countless foster parents… all the while feeling God whisper, “Get ready. You’re going to foster someday.” I never mentioned it to Michael… as I knew that I would need for him to bring it up if it was God’s will.

We moved to Arkansas in 2011, leaving our wonderful church family behind to pursue a job that Michael felt led to… in corporate America. It was a confusing time for us, as we had planned to always be in ministry. Now, looking back, I realize that God was preparing us, as He always does, for what would come next. 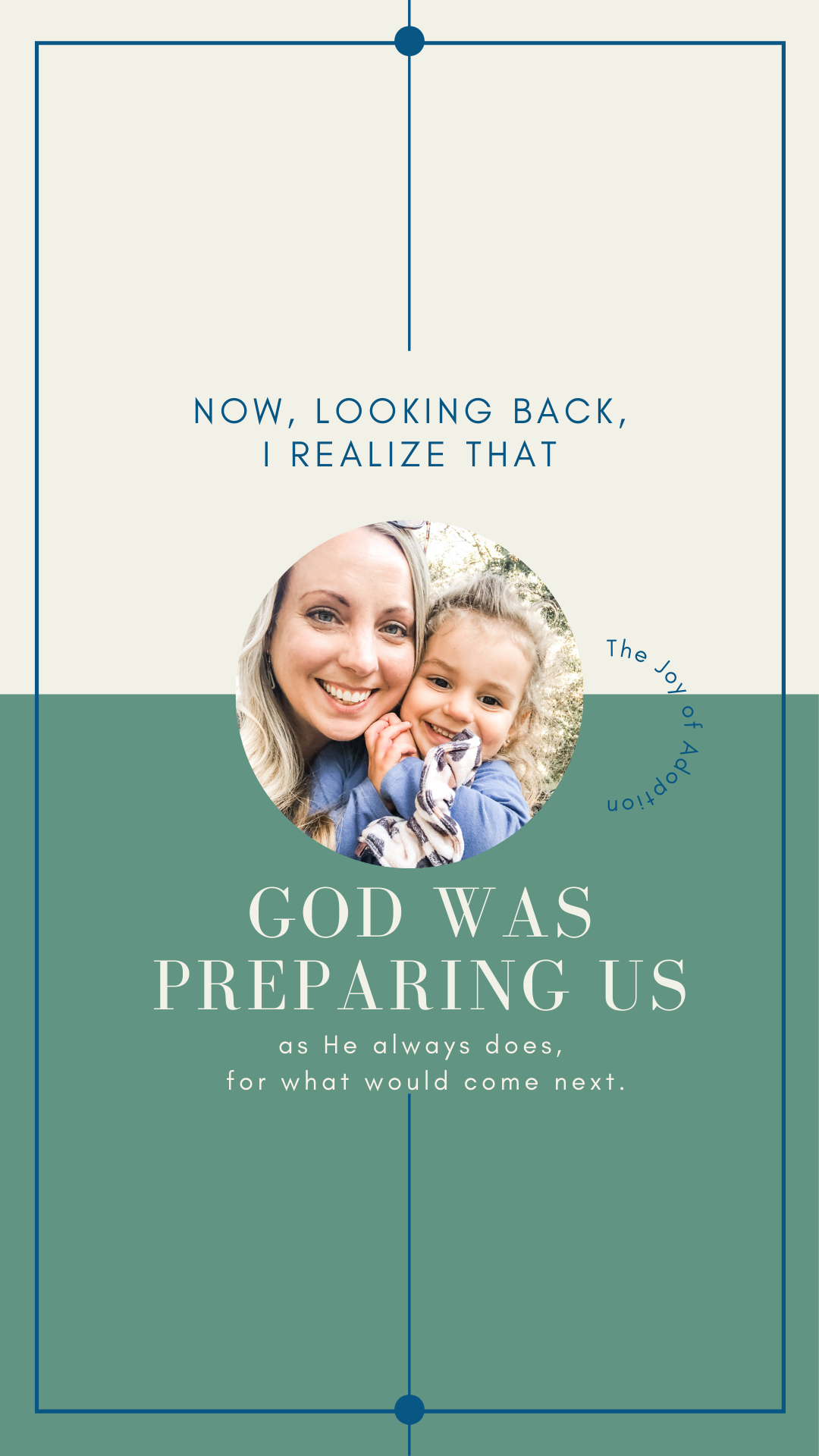 In 2015, we suddenly felt the weight of the amount of blessing that God had bestowed on us. God had grown a thriving church, Michael’s business was booming, and our boys kept asking for a sister. My last pregnancy had been high-risk… and so we had made the hard decision that our family of 3 boys would be all we would be bringing into the world, biologically. One day, Michael mentioned foster care as our area was in desperate need of foster families. We prayed about it, talked with the boys, friends and family… and made the plunge in foster care.

With all the planning, training, and preparation, we were not ready for the deep toll it would take on our boys and ourselves. Our first placement was a sibling group, and it wrecked our hearts. This was the worst-case situation… and for some reason, God brought them to us. We LOVED these kids… and through the months that they stayed with us, we were able to bring the darkness of their lives into the light and move them into therapeutic foster homes that would be able to focus on each individual kiddo. Over the two years, we fostered temporary placements… but around July of 2017, I suddenly had the urge to begin to furnish our extra bedroom as a nursery.

Michael and I had talked and prayed that if we received a placement call for a female under the age of 2, that we would take her. And on February 1, 2018, when Michael was travelling on business on the coast of California, I received that call.

Within 30 minutes, a big-brown eyed baby dressed in hot pink footie pajamas, sat looking up at me from her car seat, a huge smile on her face. My boys FELL FAST. They were immediately fawning all over her, trying to find a binky and emptying the diaper bag that she had come with. I called my sister-in-law, Tiffany, when I realized that- yes- I had band practice for our church in less than an hour– and so we loaded up the Tahoe, and drove with a screaming baby all the way to the church, picking up a binky on the way.

What I did know, was that God knew this all before. He knew the hour that our future daughter would be dropped in our laps. He knew that before we had children that we would already have her name picked out. He knew that people would tell me that she looked like me- that she would have the same high check dimple that I do- and that she would confuse “mushrooms” with “marshmallows” just as I did as a child. He knew.

I’m a writer who loves to write about the world in my imagination. But when I write stories, I want people to understand that it is not an autobiography but a version of a reality that I know personally or a combination of real stories that I’ve put together.  It’s...

The Kingdom of God (according to Jesus): Part Two

So, what did Jesus define the Kingdom as?  We know that God has been wanting to in a sense return us to the Garden so that we can walk and talk with God daily. How does that relate to the Kingdom? Here’s where it gets a little tricky- so I’m gonna try to slow things...

Beneath the Translation Infographic

Thoughts about Life from the Farm Girl

Check out my most recent thoughts on life, motherhood, and adoption!

I am not the biggest of football fans. I grew up in Nebraska; yes, amid cornfields and football. But throughout my first 21 years of life there, I never fully become a football fan. My father was a crop scientist and my mother a musician... so football games were...

The Kingdom of God: Here and Now… and Someday

We slipped and slid through the mud of the back alleys on the “small town” metropolis, where I had spent my summer teaching English in China. One of the school staff had promised to take us to a church service, and after waiting many weeks, we were packed into three...

Michael and I sat across from each other during a weirdly strange cool July morning, on the back deck off of our master bedroom. We had come a long way the past couple of weeks, as we had been fighting miscommunication, frustration, and dysfunction. (Yep- even pastors...