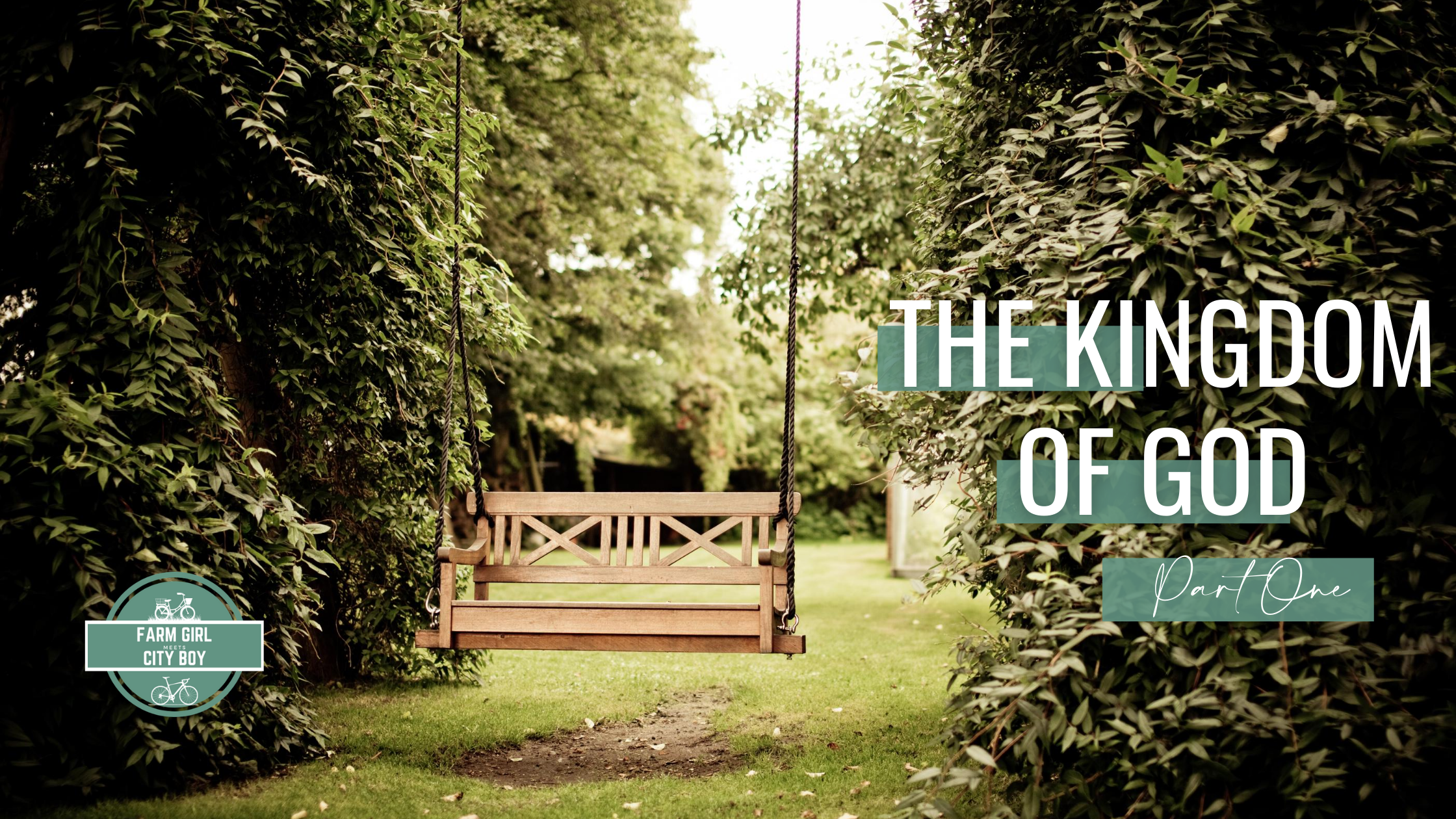 I sat, criss-cross applesauce, amidst other 1st graders, at our non-denominational church in the chilly basement in Small Town, Nebraska. The other kids whispered quietly to each other, while my good friend, Michael, joked loudly with his cousin, Nick. I stared at my brand-new penny loafers, while my favorite Sunday School teacher bent down to pull the flannelgraph out from underneath the cabinet. Kendra, my best friend throughout my childhood, leaned over and whispered, “Yes! She’s pulling out the flannelgraph!” Her platinum blond bangs were curled and fluffed and her blue eyes lit up. We both loved paper dolls… hence, our love for flannelgraph was up there too.

The teacher lined up a cutout of Jesus on the flannelgraph… some angels…. a couple harps… and clouds. Lots of clouds.

“Oooo…” I whispered back to Kendra. “I think we’re talking about heaven today…” She nodded. The teacher began to motion us closer to the flannel graph, and we scraped our knees on the carpet to get as close as possible.

“Okay, kids,” the teacher began. “Today we’re going to talk about the Kingdom of God.”

And that’s where it begins.

At least for me, that’s where I learned that heaven and the Kingdom are the same thing. I think most people, at least most people in the American Church, think of the Kingdom of God as heaven. At least that’s what I thought for most of my life. And that’s not exactly wrong. But it’s not exactly right either.

I think we miss so much of the grandness of the Kingdom if we limit it to what we’ve pictured heaven to be like since we were small children. 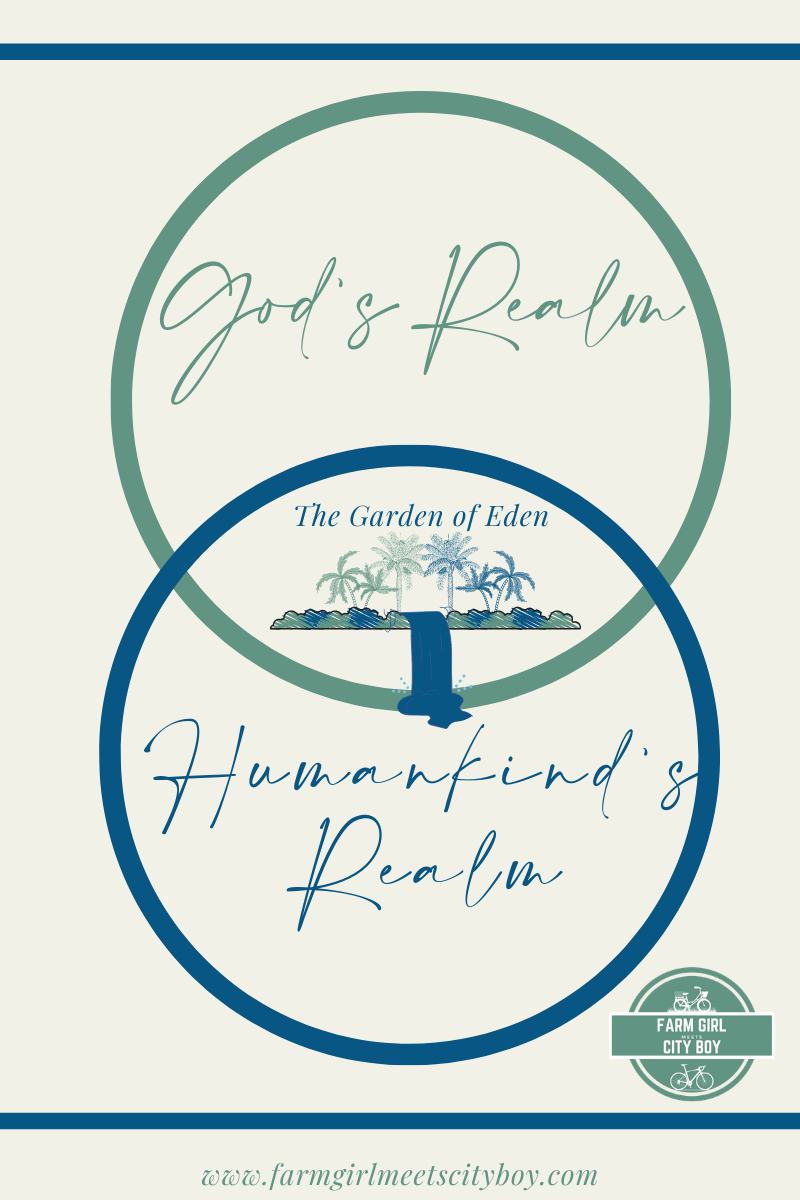 What does the Bible say about the Kingdom of God?

Here’s where we have to do a little bit of background. Like all the way back to the beginning of the Hebrew Scriptures.

At the beginning of our universe… time… creation… God was able to walk with man and woman in the Garden of Eden. God’s Realm was able to overlap the Human Realm.  Now before you go thinking that I’m quoting fairy tales… there’s not a better way to explain it. The Bible Project has an amazing visual (link here) and I’ve recreated one here as well.

In the beginning of humankind’s entrance to this world, God allowed Our Realm and His Realm to overlap, which is why God could walk with humans in the Garden. At this time, it was possible because there was no sin… no death… no decay. God could walk with them. And then as suddenly as it was there… it was gone with humans’ choice to choose what they thought was good for them.  God’s Realm had to pull away from our Realm due to human’s darkness (selfishness, idolatry, disobedience) in their hearts. God could not be around our choosing of sin over Him. (And yet… He still pursues us as we see through the rest of the story.)

Here’s another way to look at it: God’s rule overarched everything; God ruled over all things in this earthly realm, at the beginning of creation. He then gave us (humankind) the responsibility to rule over our world, this creation. However, when sin entered through choices that humankind made, God’s rule was unable to continue to reside everywhere without nullifying his dominion or power.

Okay- let’s stop right here… I’m gonna give you an action item before you continue. Please find your Bible or pull out the YouVersion app and read Genesis 1 and 2. Slowly. Don’t just skim through it. Take your time… come back to this when you’re done.

God’s Rule and the Garden

But through this entire story cast from the beginning until now, He has continued to pursue after us and restore us back to the Garden once again. He wants to be able to walk with us again. We can trace God’s hand in trying to restore us back to the Garden over and over through Scripture. On the last day of this world as we know it, Christ will come and once again God’s rule will reign over all things and his Will will continuously once again be done here on earth as it is in heaven.

Let’s look at the times where there are narratives relating to Gardens or garden imagery.

Then the Lord God took the human and put him into the garden of Eden to work it and keep it.

Essentially, humans were “planted” in the Garden to take care of it.

As you skim through the Bible, right smack dab in the middle, you’ll find the book of Song of Songs. Now… most of us have giggled as children as we’ve read the erotic and vivid language. However, let’s be adults for a second and look at the insane amount of garden imagery that is SHOUTING from the pages of this book. As you read, notice that the lovers find themselves surrounded by images of the garden. The language found here is a mirror image of the creation of the garden language. (See a passage to the right for an example of this.) Later on in the book, you’ll see the creation story played out in a sense, leading to a restored creation. (Read more about this at Bible Project’s Song of Songs and A Return to the Garden.)

The Tabernacle and Temple Design

When Moses led the Israelite nation out of Egypt, they soon realized that they needed a place while they travelled (or wandered) to worship and meet with God. Moses was given specific instructions by God and it essentially was a large tent teeming with garden images woven into its walls and furniture that were made to look like trees/flowers in a garden.

When Jesus appeared on the scene, there had been 300 years of silence from God. No prophets speaking. No audible words from heaven. And then suddenly… there was a man in the desert preaching about repentance, baptism and the coming of the King.

Next, the latest gossip is that this carpenter turned Rabbi from Nazareth was preaching about the Kingdom of God. And not just about it- that it was coming… at hand… present… but not quite yet. (Side note- this would have been a red flag to the present Roman empire… someone’s preaching about another Kingdom that’s coming?) Jesus started by preaching in the book of Mark,

“The Kingdom of God is at hand.”

As the king surrounded me at his table,
the sweet fragrance of my praise perfume
awakened the night.
A sachet of myrrh is my lover,
like a tied-up bundle of myrrh resting over my heart.
He is like a bouquet of henna blossoms—
henna plucked near the vines at the fountain of the Lamb.
I will hold him and never let him part.

Look at you, my dearest darling,
you are so lovely!
You are beauty itself to me.
Your passionate eyes are like gentle doves.

My beloved one,
both handsome and winsome,
you are pleasing beyond words.
Our resting place is anointed and flourishing,
like a green forest meadow bathed in light.
Rafters of cedar branches are over our heads
and balconies of pleasant-smelling pines.

This was the first thing that Jesus preached about (he talked about it over 100 times over his ministry that are recorded… so… may have been his favorite!) but it was also the last thing he preached on after his resurrection. He single-handedly taught his disciples about the intricacies of the Kingdom in his last days on Earth.

In fact, those same disciples (and later Paul, the apostle) wrote about a new creation coming… (doesn’t that sound like another garden?)  They wrote over and over about new things that came with Christ, and how a new heaven and a new earth would be established.

The new Creation? It’s the same thing as the Kingdom. The disciple, John, wrote in the final book of our Bibles about what the final commencement of this New Kingdom would look like.

Then I saw a new heaven and a new earth, for the first heaven and the first earth had passed away, and the sea was no more. And I saw the holy city, new Jerusalem, coming down out of heaven from God, prepared as a bride adorned for her husband. And I heard a loud voice from the throne saying, “Behold, the dwelling place of God is with man. He will dwell with them, and they will be his people, and God himself will be with them as their God. He will wipe away every tear from their eyes, and death shall be no more, neither shall there be mourning, nor crying, nor pain anymore, for the former things have passed away.” And he who was seated on the throne said, “Behold, I am making all things new.” Also he said, “Write this down, for these words are trustworthy and true.” …

So- this picture shows us the future fulfillment of the Kingdom. But how does that help us picture what the Kingdom looks like for us today?

If we think about the Kingdom, like it’s already here but not yet completely fulfilled… we can picture it almost “advancing.” As if the spread of the Kingdom, the rise of a new King… is on it’s way. (More on the King in the next post.) Here’s something else to help with that picture of what the Kingdom looks like for us today.

Therefore, if anyone is in Christ, he is a new creation. The old has passed away; behold, the new has come.

Here’s the thing, when we decide that the King of this new Kingdom (this New Creation) is the King of our lives, we become a New Creation ourselves. Like we are mini-New Creations running around and spreading the Kingdom news to everyone and anyone we come into contact with. We get to show others what Kingdom Life is like: living full of grace, peace, love and faith in God. We get to experience unity with God within ourselves (this brings the Holy Spirit into play). We get to walk and talk with God every single moment of our day.

More on that to come! (Kinda like the Kingdom…)

Stay tuned for Part Two of The Kingdom of God

I mean, how crazy does one have to be to want to geek out to God's Word? There's only one way to find out! Join me on the farm and receive a free download of my Beneath the Translation tool to help you get started! Then you'll receive monthly thoughts from me on life, love and our Creator!